Returning to running earlier than recommended, I began to feel the straining of my right foot worsen with each casual run and worry I may indeed be verging on a stress fracture. Before taking some needed time off running to err on the side of caution, I decided on one more 10K at the Hero Hustle, taking place on June 8, 2019, at Eugene T. Mahoney State Park in Ashland, Nebraska.

Not falling asleep the night before a race has become the norm, but I struggled this time with sleepiness significantly more than usual due to picking up two friends and driving two-and-a-half hours to Ashland at 4:30 AM. I had trouble waking myself up from the drowsiness prior to the event, and I felt as if I almost ran instinctively while half asleep. I struggled the vast majority of the race with unanticipated vicious stomach cramps that refused to leave. Completing the same hilly 5K loop twice felt repetitive, and the heat that must have reached 80 degrees made this one of the toughest 10K’s I have ever run, although thankfully my right foot held up. 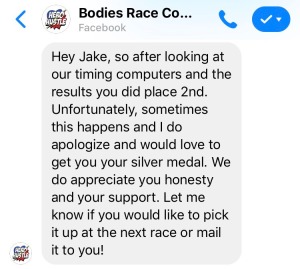 After recklessly starting at a six-minute-mile pace, I had a very average performance of a 53:48.53 finish, but I acknowledged, if these conditions affected me, they must have affected other participants also. Although I was initially declared the winner of Age Group 30-39, which pleasantly surprised me, I saw there could have been multiple system errors and asked the racing company via Facebook to recheck the results. The team, after looking over the timing computers and results, confirmed I actually placed second and thanked me for my honesty and mailed me a silver medal, after which I mailed back the gold. I do not want a gold medal I did not actually win, so this correction relieved me.