Just as we planned after my second visit to the set of Vacation, the Stebbins family and I, along with several new faces, gathered on Buford Highway for a Korean dinner last Monday. Chatting in a work-free environment allowed us to more deeply learn about and understand each other. The manager of the restaurant kept the lunch combos available after I notified him most at the table had never tried Korean food. Towards the end of the evening, Steele’s teacher wondered if I were coming to the movie’s wrap party on Saturday of the same week. I knew nothing about the event and told her, “I would feel so out of place.” Nobody at the table agreed because my voice took part in the movie, and Steele’s mother said she would speak to the production assistants the next day. Since I was being invited rather than inviting myself, I had no reason to feel guilty, but I did ask her not to push this if the movie crew appears hesitant to accommodate me. 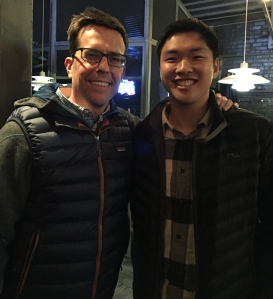 The most down-to-Earth celebrity

Among the earliest attendees to arrive at the get-together, I awkwardly wandered around and made conversation with those nearby for thirty minutes before anyone I recognized showed up. While I was talking to Steele’s sister and cousin I had just met, Ed Helms and his mother approached and gave me a handshake. I introduced myself by saying, “You probably don’t remember me,” but Ed immediately answered, “I do, our Korean GPS.” He, his mother, and I conversed for ten minutes on diverse subjects; I was even led to briefly mention my views on marijuana when they asked me where I was employed. I had assumed Ed to be a humble actor for someone with innumerable accomplishments on his résumé based on the two times I worked with him, but I never would have imagined him to be this down-to-earth and respectful had I not come to this festivity. 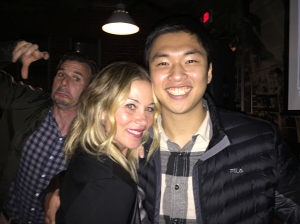 An honor working with her!

The night remained fairly consistent, as I hung out with mostly those I met on set and a few I had not had the pleasure. Skyler Gisondo was thrilled to hear I enjoyed watching The Bill Engvall Show, a sitcom in which he starred as a boy with superstar Jennifer Lawrence; he revealed not many of his friends watched or were fond of it. He continued, “Dude, although you were on set only twice, your scene is going to kill it!” I have not watched the segment, and I cannot wait to witness what he meant. We temporarily played table tennis with Steele and his brother outside, but the dim lighting made the ball virtually invisible and impossible to play. The celebration also consisted of a sidesplitting gag reel of the film, and I have rarely ever anticipated a movie’s release this fervently. Once the clip ended, I spotted Christina Applegate near me and was eager to finally inform her of my gratitude towards working with her. She welcomed me with a big hug, but standing beside the disc jockey, we could hardly hear one another and had to shout in each other’s ears. I then proceeded to vigorously dance next to the stars and their families for an hour, even encouraging Skyler and Steele to “move it.” I sweated like a mad pig and was pleasantly surprised my conscience let me dance wildly in public with numerous smartphone cameras rolling without any alcohol in my system.

I made sure to express my appreciation to the majority of those, including various production assistants and directors, who made this exclusive journey possible. They all greeted me with a smile that implied, “I remember you.” Apparently professionals took photos of me on set as well, but I could not spot me in the slideshow. I left prior to the party ended to prepare for church the following morning. I had the chance to tell Christina in a quieter atmosphere, “It was an honor working with you,” and she replied, “You did a great job” with a firm handshake. I did question myself throughout the party if I belonged there; regardless, I thank God for allowing me to experience a snippet of the film industry that rarely any nonprofessional actors encounter. I will cherish these memories forever.